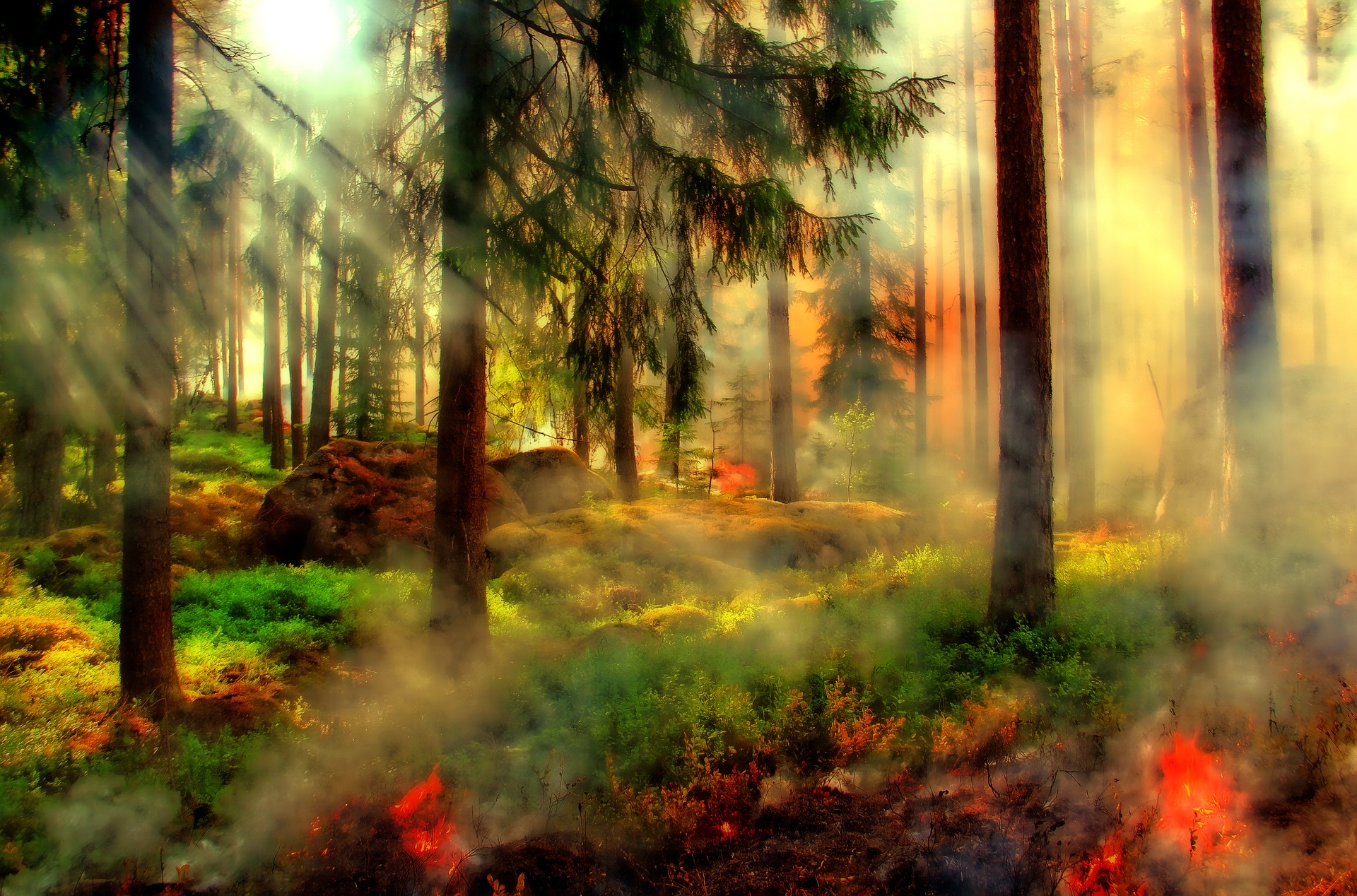 We wanted to go more into the history of Austea, specifically a bigger focus on the events of the Cataclysm. The Cataclysm began suddenly and without warning as far as the humanoid races of the world were concerned.

The Cataclysm began suddenly and without warning as far as the humanoid races of the world were concerned. It all began when in the middle of the capital of the Thessun Kingdom, Vunrihm, a portal appeared out of nowhere and a flood of ghoulish creatures poured forth from the opening. These ghoulish forces attacked and killed everything in their path, transforming the dead into undead as they went. The dwarves of the Thessun Kingdom were no strangers to dealing with ghouls. However, these particular ghouls seemed to be more cunning than any ghoul the dwarves had ever faced before. In the span of one hour, these ghouls had turned a wiped out a fifth of the city’s population into undead before a new portal opened and whatever ghouls remained ran through, leaving the dwarven soldiers left to deal with their now undead brothers and sisters.

During this time from the mountains of the Cragged Peaks to the north dozens of blue dragons of varying sizes flew down to Solana and struck out at Holimion, the capital city of the high elves. For one hour, the dragons flew over and set the city in flames with the elves struggling to retaliate against this overwhelming force. At the end of this hour, the dragons gathered again and flew back off from whence they came.

As all this was occurring red and green dragons flew from the Kasim dessert and wreaks havoc against all the towns south of Orinthal before making strikes against the city itself. Again, for one hour dragons ravaged the land this time with the human forces of Orinthal barely holding them back. Again, by the end of this hour the dragons fled back from where they had come.

The wood elves of the Nephenee were the only ones spared the majority of the destruction that the other races endured. During this hour, black dragons scoured the land of the Nephenee but due to the magic that kept the capital of Meliamne hidden, the draconic forces simply ravaged the woods themselves in their frustrations, eliminating several wood elf outposts. This rampage ended just after one hour as well.

For the following months, once a month for one hour, portals appeared not just within a city in the Thessun Kingdom, but across the realm as these strange intelligent ghouls struck out against all humanoids as they became increasingly reinforced with draconic help. For the first two years of these raids, the varying empires and kingdoms of Nabresal faced these threats on their own thinking them the work of the duergar or drow who had waged war against the surface centuries before but no such sign of these Underdark entities presented itself.

Then a portal opened within the Thessun Kingdom, which did not close. Out of this portal flowed hundreds of the ghoulish creatures swarming the outlying cities of the empire turning more and more of the living dwarves into undead enemies. Chromatic dragons of all types swarmed Solana and the Vremor Empire specifically laying waste to their outposts and towns. The Nephenee, though attacked, found themselves in the best shape during this conflict as the location of their capital was still shrouded in magic and they were able to fight while hiding amongst the trees.

During this onslaught, dwarves, who had come to prayer and focus on divine magics to combat these terrible beasts eventually held the line against the undead horde and stopped them from proceeding closer to Vunrihm. The high elves of Solana learned powerful arcane spells as they studied their draconic enemies and used this magic against them. The Vremor Empire meanwhile utilized a combination of both of these magics to varying degrees of success as this predominantly human empire found portals still forming for one hour within their borders as well as dealing with the draconic forces that came from the Kasim desert.

As another year went by, it was the wood elves of the Nephenee who extended the first bit of aid, sending some of their forces to the Orinthal and aid in any way they could. It was then that these two rulers realized that they could not face these constant attacks alone and decided to send whatever aid they could across the land of Nabresal. The wood elves of the Nephenee found themselves to be the most mobile and sent many forces to aid the high elves of Solana and particularly the dwarves of the Thessun Kingdom. As the four kingdoms joined together to combat this terrible threat, they found themselves better and better able to hold these forces off and even push them back.

For three more years, combat waged on and off as draconic and ghoulish forces continued to pepper the humanoid nations, never really giving any nation a chance to recover or retaliate in any way. It was towards the end of this fifth year that a group of adventurers from the various nations of Nabresal decided to band together and tries and eliminate this threat for the last time. During a particularly bloody battle on the edges of the Thessun Kingdom that the dwarf cleric Gurdis Rumnaheim first fought beside the likes of Perrin Tosscobble a stealthy halfling from the Nephenee, Grim Chergoba a human soldier of the Vremor Empire, Baraks Shemov a tiefling sorcerer who was a hermit prior to the war, and Thoven Arborshade the eventual hero of the Cataclysm and high elf of Solana.

As this battle ended, Gurdis proposed that the group stay together and figure out a way to eliminate this threat finally. For the next five years as the party joined forces, they traveled beyond where the armies were able to go, climbing high into the Cragged Peaks and dealing with several blue dragons in their lairs. They searched beyond the Nephenee deep into the Rugorim Woods to find what black dragons lay in wait. They attempted to cross the Kasim desert to find what dragons were there and wipe them out. However, their biggest task had them push through the literal horde of undead that guarded the seemingly permanent portal deep within the Cragged Peaks far beyond the edges of the Thessun Kingdom and dive through the portal.

Not much is known about what occurred beyond the portal but the party returned just as the portal closed behind them though without their friend Grim. They were deeply scarred by whatever happened beyond the gate and they simply told the leaders of these nations that they went to another plane known as the Shadowfell and dealt with a terrible leader of the ghoulish forces. They said Grim fell providing the party a chance to escape with the news that the true leader of these forces was a being known as a Shadow Dragon who had established his lair much farther south within the Kasim Desert than the party had traveled before.

With renewed determination to avenge their fallen ally, the party set out to the lair of the terrible Ancient Red Shadow Dragon known as Zinnath the Dark Tyrant. It is rumored that Zinnath realized the location of his lair had become known and decided to send out one final effort to wipe out everything that the humanoid nations had built. Sending every dragon and ghoulish force under his command against the nations of Nabresal, the battles that took place over the next few hours were massive and terrible. Then, just as suddenly as these forces appeared, the battle was over.

It was over a month before anyone found out what had occurred within the lair of Zinnath as Thoven reappeared in Orinthal, horrible scarred and still very badly injured though alive. He never went into detail about what occurred but simply cried as he said his friends were gone, but Zinnath was dead and would never return. Thoven was cared for within Orinthal until he was well enough to travel and before he headed home to Solana, he went to the Thessun Kingdom and the Nephenee. He went to each of the homes of his former friends and allies and thanked their families, as he owed these allies his life. In each place Thoven was met with great sadness and yet intense pride these each of these nations and these families had a citizen of such great importance and power that gave their lives to save everyone. Each of these nations made monuments to these great figures with the dwarves of the Thessun Kingdom even renaming their capital to Rumnaheim in honor of their cleric Gurdis.

A year has passed since the last gasp of Zinnath’s forces had swarmed the kingdoms of the land of Nabresal and the nations of this world had spent their time celebrating the lives that have been saved and rebuilding their empires with the aid of their new and closer allies.

This site uses Akismet to reduce spam. Learn how your comment data is processed.